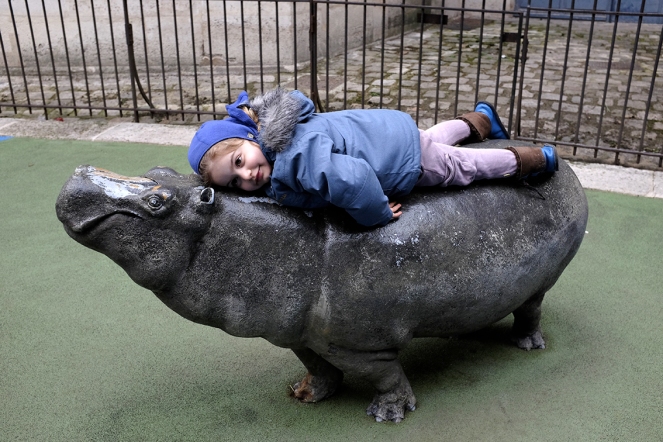 HOW TO TEACH YOUR KIDS ABOUT WILDLIFE CONSERVATION

You probably heard about the death of Sudan, the LAST male northern white rhinoceros. Or that giraffes are now on the endangered species list. But what you probably didn’t know is that, every year, at least 10,000 species become extinct! So how can we teach our kids to take a better care of the planet than we are doing right now?

There are a myriad of ways to expose children to the ideas of  wildlife protection and here are just a few suggestions:

WHY YOU SHOULD NOT MENTION  ANIMAL DEATH AROUND CHILDREN

Most kids under 3 do not understand the idea of irreversibility (death) and, honestly, there is absolutely NO need talk to any child about dying animals, poaching, killing, guns, etc. until they are developmentally ready for these conversations – usually around 11 or 12 years of age. Of course each child is different, but don’t destroy your kid’s innocence too early. They will have plenty of time to learn these things as they grow anyway.

Talking about things that are not developmentally appropriate, will not only desensitize the child, but create anxiety because children do not have enough emotional intelligence to process that information. Plus, it takes them out of the present moment and childhood should really all be about “now.” Let them enjoy the innocence for as long as they can.

ACTIVITIES TO TEACH CHILDREN THE IMPORTANT OF WILDLIFE CONSERVATION

***Disclaimer: This post contains affiliate links, and if you decide to purchase anything from suggested links or companies, I may receive a commission. Recommended products are either things I love using or think would be helpful for you. Making your purchase using these affiliate links helps keep this site running, so thank you kindly!

BOOKS THAT WILL INSPIRE KIDS TO BE NATURALISTS, CONSERVATIONISTS OR ENVIRONMENTAL ACTIVISTS

I love the following books  for their strong female protagonist. As a positive role models, Jane Goodall empowers little girls and boys alike to protect nature. All three of these books recount her awe-inspiring biography and life with chimps. Adèle now says she is also “a watcher,” so mission accomplished. 😉 (For those who are curious, in this photo she is using a brand of French binoculars similar to Kids Binoculars

, but there are others that are appropriate for different ages that I reviewed below.)

The following books are wordless picture books that open up the conversation about ecology.

Life in the Ocean: The Story of Oceanographer Sylvia Earle by Claire A. Nivola

– I’d also like to recommend this book because a) it has a very strong female role model who followed her childhood passions to explore and protect the oceans and b) it is based on a true person’s journey.

, but as you can see in the photo above, she was even lucky enough to fit a small gecko inside! It has two lenses (top and side) to watch from and is easy for little hands to hold and use. 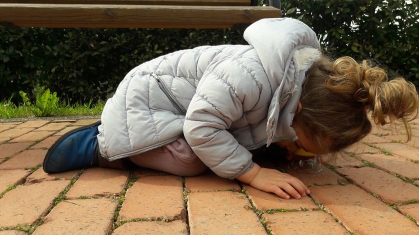 Sometimes she uses the top part of the lens by itself by putting it against a plant or over bugs, as in the photo above. This way she doesn’t need to catch anything and uses it more like a magnifying glass.

WHAT RESCUING ANIMALS WILL TEACH YOUR CHILD

Here are a few animals we rescued over the last year and their stories. I hope they will inspire you to be aware as you walk or drive outside. 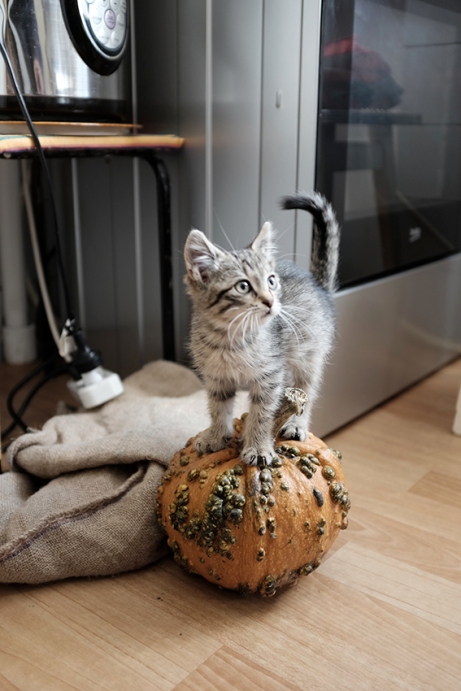 We found this adorable kitten at one of the busiest roundabouts in the center of Tbilisi, Georgia and had no choice but to take it with us. Luckily (and not by accident), there were at least 3 pet shops across the street so we immediately took Sushi there and asked if we could leave him. They said that they already had enough cats and that you can’t just drop off lost animals like that at a shop, nor at the vet’s (a big shock for us as that’s what we used to do in Australia). So we had him checked and treated for lice. He was too small to have rabies shots but seemed in excellent health. A vet later confirmed that indeed, he was in perfect health and that it looked like someone had dropped him off at the roundabout on purpose. He knew how to use a litter box and once well fed, became a very active, lively kitten. We had Sushi for 10 days before I managed to find a loving forever home for him. We were all very sad and had a big cry after he left, but with our nomadic lifestyle there was no way for us to keep him. We do keep in touch with his owner, though, and get occasional photos.

Things we learned from kitten rescue

One evening, my husband found fig frog in food at an organic shop, once again in Tbilisi, Georgia. It was also in the middle of the city center, so the only option was to take it home. The shop keeper gave him this plastic box and we put some holes in it so that it could breath. We put some leaves inside and a bit of water as well. Adèle introduced it to her toy frog so that it could keep him company overnight. We lived right under a mountain, but it was too late to go there, so we had to wait until the morning to release the frog. When we woke up in the morning, the plastic box was covered with very gross yellowish substance.

I think the frog was not very happy being trapped inside for this long. So, we hiked up the mountain to look for a stream. Here is a photo of Fig Frog jumping off the box to find a new home. Follow Adèle’s finger in the photo to find him at the edge of the box, about to leap into the water. 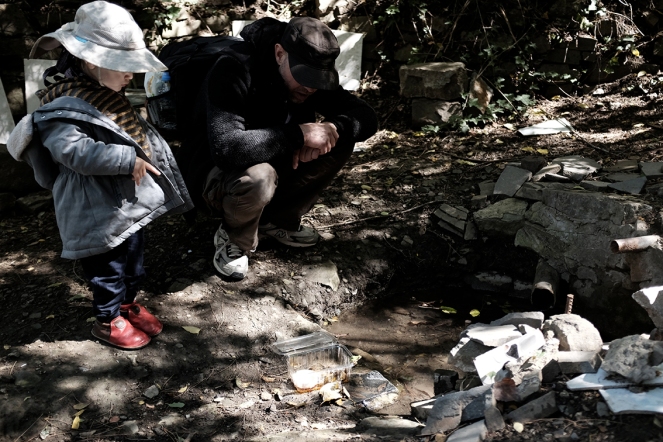 Things we learned from frog rescue 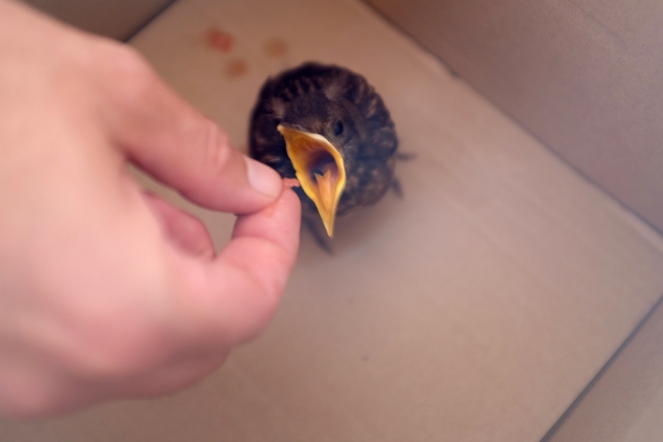 I saw a baby blackbird as we were driving in Italy and asked to stop the car. It had fallen from a nest and the trees were very high, so there was no way we could put it back. Luckily, there were no cars on the road so we stopped and caught it in a scarf. It was a baby blackbird that fell out of the nest and we took it home. After doing some research online, it turned out that blackbirds like to eat meat and watermelon so that’s what we fed it. The next day we drove him to a bird rescue Aviary in Livorno. It was a big drive for Adèle, but we were happy that the vet found Merly in good health. They took him in and placed him into a bird nursery. There, it was taught how to fly and was released back into the wild a month later!!

Things we learned from bird rescue 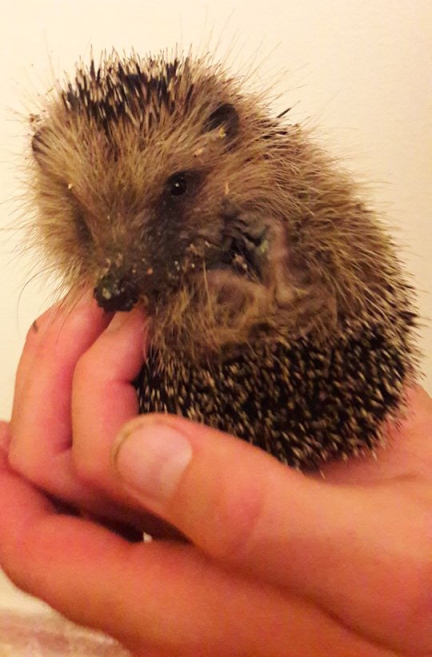 This adorable hedgehog was crossing a road at night and seemed lost, so we took him in for the night. Luckily, one of my former student’s knows a lot about hedgehogs and I reached out to her for advice. She said that it seemed healthy and could be released back into the wild, so we did that the next morning. But I did not sleep a wink during the night! It is THE noisiest animal in the world! I had to sleep at the other side of the house and still heard it making noises all night. It didn’t like being in a box and wanted to escape.

Things we learned from hedgehog rescue

I found Snaily on our kale as I took it out of the refrigerator! It was happy to be out of the cold and was not scared at all. 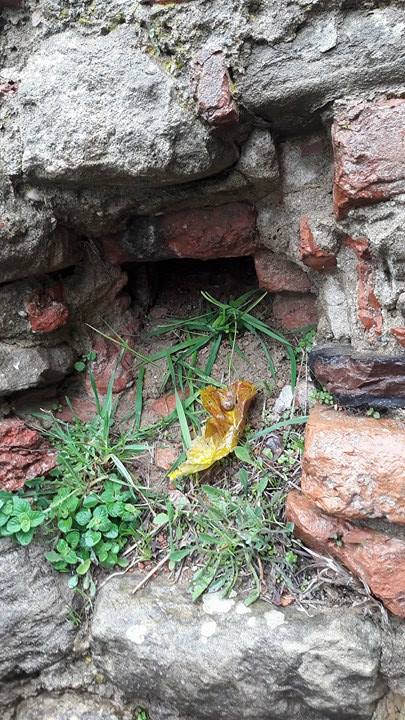 On one of our walks, Adèle once noticed that some snails had made houses in arrow loops of castle walls. (This is where archers used to fired arrows from). So she suggested that we take Snaily there so that it can live with his new friends. When we returned the next day, it was not there anymore. But once in a while we see a snail in the loopholes and she thinks it might be Snaily. 😉 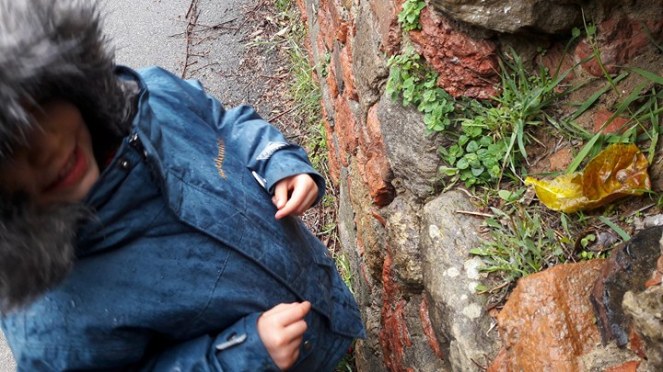 Things we learned from snail rescue

Have your rescued any animals? I’d love to hear your stories!

5 thoughts on “How to Raise a Conservationist: Kids’ Activities that Protect Wildlife”

LETS HAVE SOME FUN.

©2017 www.RainyDaySunnyPlay.com. All Rights Reserved. Resources and advice are for information only.