I am so honored and excited to present to you this week’s article. It contains an interview with the UNBELIEVABLE master origami artist and a pioneer in this field, Dr. Rober J. Lang!

Origami is the art of folding paper which originated in Japan in the 17th century. In Japanese, “ori” means “fold” and “kami” means “paper,” so traditional origami does not involve gluing nor cutting. It is an art form that not only encourages creativity, but is accessible for free – all you need to get started is some scrap paper.

Adèle has been practicing origami since she was two (see below) and that is how we discovered Dr. Lang‘s AMAZING work. We are currently using one of his books for practice and I hope that his art will also inspire you to start folding.

***Disclaimer: This site contains affiliate links, and if you decide to purchase anything from suggested links or companies, I may receive a commission. Recommended products are either things I love using or think would be helpful for you. Making your purchase using these affiliate links helps keep this site running, so thank you kindly!

What Experts Are Saying About Origami: Q&A With the INCREDIBLE Origami Master, Dr. Robert J. Lang

A former physicist, engineer, and R&D manager, Dr. Robert J. Lang is one of the most renown contemporary origami artists. Through his work, Dr. Lang explores the links of origami to math, science and technology and has authored 17 books on the subject. His incredibly realistic work (see videos and photos below) has been exhibited at museums world-wide and has awarded him many high distinctions.

Q. Can you briefly describe who you are?

Q. I read that you were introduced to origami at 6 years of age. Do you remember this experience, and if so, what/who inspired you to continue?

I don’t remember the precise moment, but I remember that it was a book of crafts that had instructions for a few traditional origami designs. The thing that attracted me was that all I needed was paper (which was essentially free) and my hands, nothing more.

It’s good for hand-eye coordination and is good practice for visualizing things in 3D. But I don’t really look at origami for its utility in teaching skills. I think that folding for the joy of creation should be sufficient reason to pursue it.

Q. What is a good age to introduce origami to children?

There is no minimum age. When a child expresses interest, she or he is ready.

Q. Do you think origami should be taught in schools?

Q. Are you aware of any scientific studies that link effects of origami practice on brain development?

I’ve not seen anything specifically linked to brain development. There are some studies of origami’s utility in education, which have been presented at the OSME conferences and in the associated series of books.

Q. How did your origami practice turn from craft to art? When did you start inventing your own models?

I started designing my own origami at around age 10 or 11. I don’t really see a bright line between “craft” and “art”, so I can’t really say how it turned from one to the other.

Q. For you, is origami about the process or the final product?

Q. How do you approach / handle mistakes? Can they be fixed, or do you throw out / recycle the paper?

“Mistakes” are always an opportunity to learn something new. If a mistake is not going to alter the finished fold—for example, I make a stray crease that shouldn’t be there, but will end up hidden in the interior of the figure—I keep on folding. When I’m done with a sheet of paper, I throw it out, but that means it ends up in recycling.

Q. I noticed that you use thick paper with one or two colours (not ones with patterns or illustrations that I have seen in stores). Which paper would you recommend for someone who is just starting out?

I use many different papers, each suited to its particular project. There is no one best paper. I describe several types of paper (and folding media) here: http://www.langorigami.com/article/paper

Q. Which model would you recommend that a beginner start with?

I wouldn’t recommend a specific model. Rather, I’d recommend that a beginner start with a good beginner-level book. Books by Michael LaFosse

are particularly good. I also recommend the videos by Sara Adams, found at http://happyfolding.com.

A very nice thing about origami is that the VAST majority of origami books and publications are kid-friendly in subject matter; probably because many, many origami practitioners are kids.

Q. Sometimes I find these diagrams quite challenging. Do you have advice for deciphering them?

It always good to start with easy things, and then slowly work your way up. It’s also helpful to study the keys to the various symbols, but again, start with simple things, then work upward.

One of the great things about origami is that the diagrams convey so much information that it’s often not necessary to read the words; so origami practitioners very often buy and fold from foreign books, even when they can’t read the language, because the diagrams themselves are sufficient. I remember meeting a young man at an origami convention who was 5 years old; he hadn’t learned to read yet, but he could fold everything in John Montroll

’s books (which are Intermediate to Complex in difficulty), working solely from the diagrams.

Q. Could you recommend any of your own books?

Of my own books, I’m particularly proud of “Origami Design Secrets

” and my newest, “Twists, Tilings, and Tessellations

.” Both are for advanced folders. For beginners to intermediate, I recommend my “Origami in Action

Q. In your TED video, you said that “origami revolves around crease patters.” Is there a minimum amount of creases that one needs to make in order to call something origami?

Different people have their own definition of “origami” (which, as a term, is only about 100 years old). My personal definition is “an art form in which folding is the primary means of creating the shape.” There’s no numerical number of folds; even a single fold could be origami. (In fact, artist Paul Jackson has an entire series of “one-crease origami.”)

Q. I heard that your inspirations come from wildlife. What is your favourite origami wildlife model?

It varies over time, but right now, there’s a cactus that I’m rather fond of.

Q. You also mentioned that you “solve problems” with origami. This description sounds like math. Could you talk about this connection and what it means to you?

I use math to design origami, both for artistic purposes, and also to solve technological problems using folding.

Q. I noticed that origami practitioners seem to be predominantly male. Have you found this to be true?

No. In fact, in Japan, for many years, origami was primarily considered to be an activity for women. What you’re seeing is that perhaps the highly visible origami artists are predominantly male. I suspect this is more due to cultural reasons; consider that most of the highly visible chefs are male, despite the fact that (probably) most people who cook are female. Fortunately, we have world-class origami artists like Beth Johnson, Kate Lukasheva, Dasa Serovna, and more, who are role models for girls and women to be more visible in their origami art.

Q. You worked for NASA and used origami principles for objects in space. How do you see future origami applications in real life?

I expect that they’ll continue.

Q. Thank you kindly and warmly. 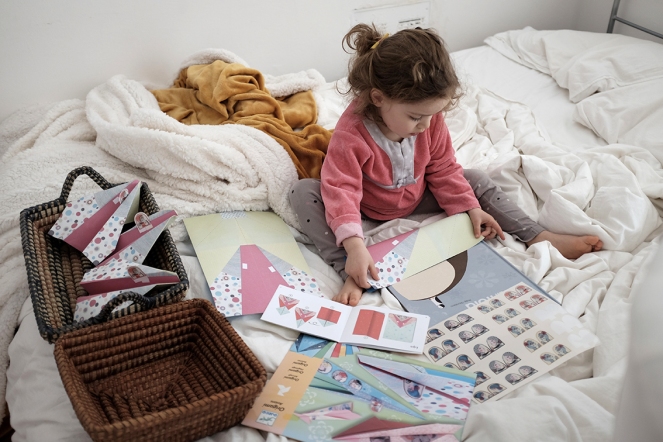 As mentioned above, I introduced Adèle to origami when she was 2 years old. We were migrating from Australia to Europe and I wanted a light, yet versatile toy for our 24+ hour long journey. The idea was that I’d fold different models for her and we’d use them as toys on the plane. Instead, she started folding (paper, restaurant napkins, clothes, etc.) and has been doing it every day ever since. After a year of daily practice, she was able to fold 3D tulips like this one…

…and after another 6 months, started invented her own, original origami designs like this rocket ship and lotus: 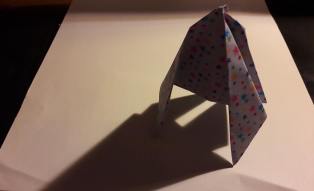 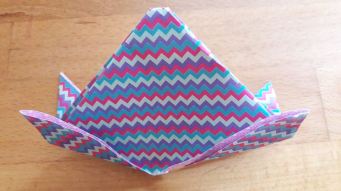 In order to help her with this passion, I have been teaching myself origami. It’s been an enlightening experience so far and we’ve both learned a lot along the way.

WHAT YOUR CHILD CAN LEARN FROM A SINGLE SHEET OF PAPER

Personally, I use origami as a mindfulness art activity, but here are a few ways in which origami can help your child:

I have found Djeco sets to be particularly helpful in teaching her the basics. We’ve tried them all and this is why we loved them: 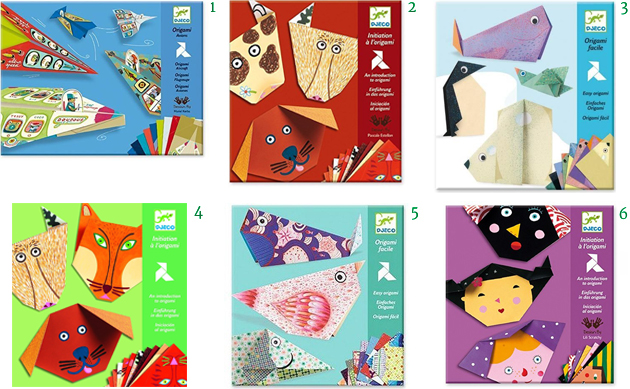 Here are some of the papers we like to use. These papers don’t hold form and details as well as professional origami papers, but are perfect for practice, especially when just starting out. 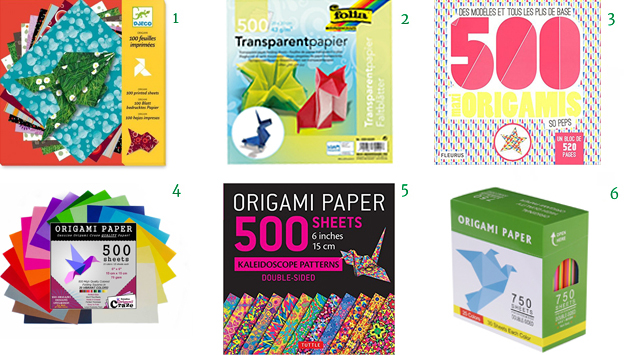 As something a little different, also check out Origami Games

which provides hands-on fun for Kids! It includes 22 cooperative and competitive games and 21 foldable pieces.

You can make a DIY origami Display Book

by printing out interesting diagrams you find online. But I prefer to support artist that put so much hard work in making origami accessible to others. So, here are some of my book suggestions for beginner origami books for kids:

28 thoughts on “Fantastic Beasts and How to Fold Them: The INCREDIBLE Art of Origami Master, Dr. Robert J. Lang”

LETS HAVE SOME FUN.

©2017 www.RainyDaySunnyPlay.com. All Rights Reserved. Resources and advice are for information only.